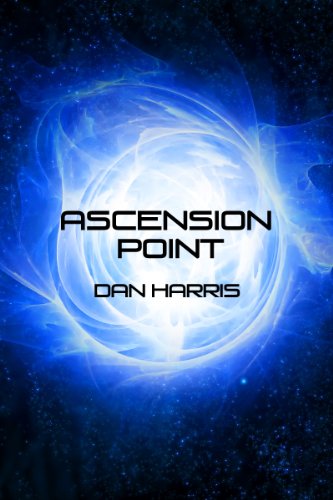 about this book: ASCENSION POINT is my first novel. It is set thousands of years in the future, at a time when humanity has fractured into four distinct and antagonistic groups.

The Commonwealth is a galaxy-spanning republic of trillions of citizens on a million worlds. The Titans are a much smaller group, highly skilled in combat and dedicated to the pursuit of genetic perfection. The Seryn are another small group of humans who have developed psychokinetic powers - but disappeared from galactic life some years before the events of ASCENSION POINT. Finally, the Collective are a mysterious faction of human-machine hybrids, living between the stars on advanced space stations and shunning human contact.

ASCENSION POINT tells the story of how representatives from each of these four factions are brought together by the promise of the legendary Book of Ascension, an ancient and powerful artefact. However, they soon find that theirs is a much larger quest, and the fate of the galaxy - and humanity's very future - is at stake.

I've been in love with science fiction since I picked up my mum's Reader's Digest copy of Isaac Asimov's Foundation trilogy when I was about 12 years old. I devoured it in a week, and I've been hooked ever since. My favourite authors are Iain M. Banks, Richard Morgan and China Mieville.

I've always wanted to write, and after many failed starts over the years I finally knuckled down in 2011 and started writing properly. I finished the first draft of ASCENSION POINT in May 2012, then spent a few months editing and polishing it until it was as good as I could make it. I had the help of a wonderful editor from Red Adept Publishing who really helped me make the book shine.

I was also honoured to be selected as a Red Adept Select (www.redadeptselect.com) which is Red Adept's program to highlight books they feel are 'Outstanding in Genre'. That was a real morale boost for me as I published ASCENSION POINT on Amazon, Kobo and Smashwords in October 2012.

My cover was designed by the wonderful Stephanie Mooney (mooneydesigns.net).

To my potential readers, I hope I've inspired you to take a look at ASCENSION POINT, and if you do, I hope you love the book as much as I loved writing it.