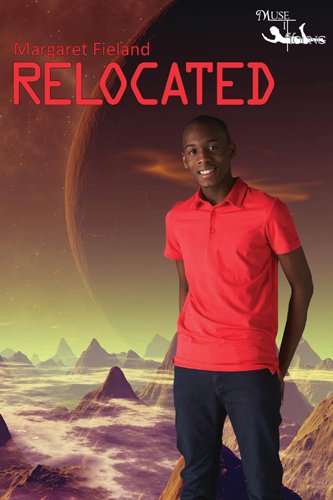 about this book: Relocated is a science fiction novel set a couple of hundred years in the future. Keth, the main character, finds himself on planet Aleyne when his father is posted to the military base. Relations between the Terran Federation and the Aleyni are touchy at best, aggravated by cultural differences and the alien's gazal, their name for mind-speech abilities. But psi in any form is illegal in the Terran Federation, and when Keth discovers he has mind-speech abilities, he's forced to examine what he thought was the truth. He uncovers secret after secret, ultimately leading him to face a choice: who he is and what he believes.

I wrote the novel for NaNo (National Novel Writing Month) in 2010. I started planning the novel in late September, spent all of October planning, November writing, and December through the end of June revising. Because I started the novel in large part to overcome my fear of world-building, I devoted most of my planning time to that, and far less to my story. However, I sketched out the skeleton of the novel, the major plot points, high and low moments, the character's external and internal conflicts. The details of the scenes fell into place as I wrote.

Keth is plunged into life among the aliens and is faced with a number of cultural differences that make him uncomfortable. The Aleyni society is based on personal responsibility and consensus, rather than on laws and procedures, and the infrastructure -- police, government -- is missing. When faced with a crisis, Keth is disturbed when by his friends' reactions and must decide what to do himself.

One of the themes running through the novel is secrets and the damage they cause. Another is personal responsibility. I hope readers of this novel can follow Keth's journey as he untangles layers of lies and uncovers the truth about himself and his beliefs.