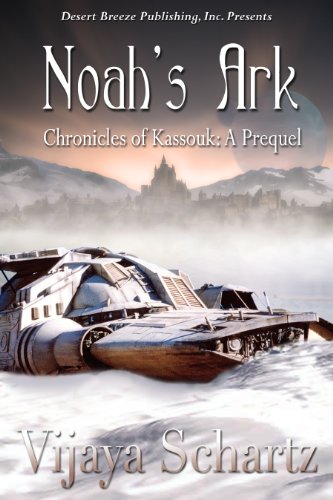 Book: The Chronicles of Kassouk The Beginning - Noah's Ark by Vijaya Schartz

about this book: In this prequel to the Chronicles of Kassouk series, a crew of human settlers, complete with everything needed to seed a new planet (plants and animal life), falls out of jump space and crashes on the wrong planet, far off their intended target, in an unexplored part of the universe.

On this ship, most settlers and crew are running from society. No questions asked. Their past is erased. They know they will never return to Earth. Of course, all of them have secrets. Dangerous secrets. And prejudice doesn't end in the far reaches of space. It just takes different forms.

My kick-butt heroine is the ship captain. A girl with a gun who doesn't flinch in the face of danger. The hero, because this is also a romance, is the survival expert, an ex Space Marine with a deadly secret.

As the marooned settlers on this frozen planet realize they didn't end up there by chance, and a sinister race of aliens intends to use them for dark purposes, they organize themselves to regain their freedom. In the struggle that ensues, secrets will be revealed, and our hero and heroine will be put to the test. They'll fight, not only for survival and freedom, but for the right to love.

• "Filled with action, adventure, greed, betrayal, and love... It's the little touches which bring the humanity into the story from Viking the cat to Tabor's horseback riding lessons... " 5 stars - Amazon (Steph).