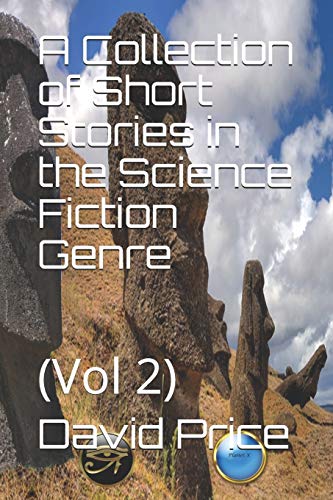 Book: A Collection of Short Stories in the Science Fiction Genre - (Vol 2) by David John Price

about this book: My book is a collection of seven short science fiction stories, all new and unpublished works that are entertaining reading. The themes cover manipulating time, but not in the context of travelling in time. The threat of meteors and what they were bringing to Earth in the early stages of the pandemic in 2020. Stories of a civilization destroyed by a supernova and a few survivors with a ruling Prince, that set out to find a new home, but are plagued by an insidious life-form that keeps attacking the survivors, until they link up with Earth colonists to make a last stand. Women in the future preferring to have android children to maintain their looks. Giant space arks carrying the entire populations of two war torn planets, that travel from the past to Earth and visit ancient Egypt, where a General is instrumental in establishing a new religion before the other spacecraft journeys on to found new colonies in the Trappist system. Aliens that force spaceships from other worlds to do mock battles involving technology from their own history, but the threat is 'real' for if they cannot prove cunning and superior strategy they will not be returned to their own time and sector of space, involves WW2 Nazi Victory weapons. A teleportation accident turns a alien scientist into a monster. My book was written to occupy my mind during the long period of several lock-downs as I wrote a collections of short stories before in June 2020. My primary readers are those who enjoy science fiction. It took about 8 months to write as I had problems with page numbering and the publisher changing book ID referencing from ISBN due to Brexit The book title was self-explanatory and necessary with the book content and I did much research designing a communication system that did not use radio waves but used 'granular boundaries' between dimensions and I invented a fictitious communications array which I will use again in other stories. I tried fast fiction techniques to emphasize horror in a short chapter