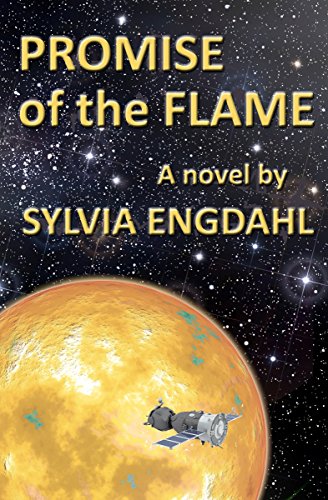 Book: Promise of the Flame - A Novel (The Hidden Flame Book 2) by Sylvia Engdahl

about this book: This book by its very existence is a spoiler for some of the suspense of Stewards of thre Flame, so stop here if you plan to read that book and don't want to know in advance how its protagonists solve their problem. However, though this novel is a sequel about the same characters, it is completely independent in the sense that it can be read alone. You don't need to have read the preceding book, as enough backstory is included to make the situation clear. The two books are very different from each other and people who didn't care for Stewards of the Flame often enjoy this one.

I didn't plan to write a sequel. Contrary to some people's impression, the ending of Stewards of thr Flame wasn't meant to be a cliffhanger; I thought that since it wasn't the sort of book to end in tragedy, readers would assume the characters survived the concluding crisis, and that to say anythuing more would be anticlimactic. But later, I got ideas for specific events in their later lives and saw that these would make a new story.

Could a few hundred people, stranded by their own choice on an uninhabited pkanet with few resources, manage to survive? Would their goal of creating a culture in which psi powers and technology are viewed as equally important be worth the sacrifices they've made to establish it? Could one man, unexpectedly saddled with more responsibility than any single person should have to assume, keep the colony safe from one threat after another?

This was my second indie novel, and my reputation in traditional publishing had been made as an author of YA novels (or more precisely, since those were wreitten at a time when no YA designation existed, of "chlldren's books"). Thus people who knew my name just assumed that anythng I wrote would be okay for children to read. Despite my statement in all publicity that this is an adult novel, several reviewers said it "should not have been issued as YA" and at least two of the few libraries that acquired it put it in the YA collection; I had to write to them to get it reshelved. The book is not appropriate for middle-school kids. There's nothing graphic in it, but it deals with situations involving 13-year-olds that they or their parents might find misleading if not disturbing, I don't want this to affect the reception of my real YA books if someone unfamiliar with them comes across it