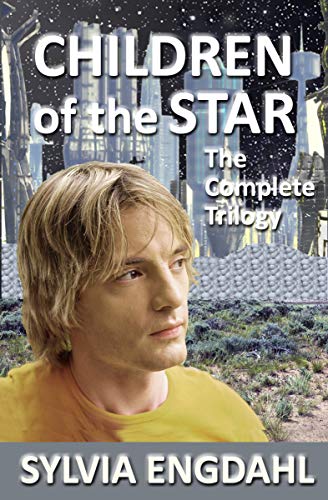 Book: Children of the Star - The Complete Trilogy by Sylvia Engdahl

about this book: This trilogy includes three novels that were originally published separately in hardcover: This Star Shsll Abiide, Beyond the Tomorrow Mountains, and The Doors of the Universe. They were issued in 1972, 1973 and 2982 as YA books. Then in 2000 a different publisher issued the ominbus in both paperback and hardcover as adult science fiction. That publisher went out of business in 2007 and since then I have published my own ebook editions of the separete ebooks, and more recently of the omnibus. I have also published paperback editions of the omnibus and of This Star Shall Abide alone.

This Star Shall Abide, which was issued in the UK under the title Heritage of the Star, is the best known of the three and the only true YA book; it can be enjoyed by readers as young as 11 or 12 although adults also like it. Many remember it from the past and say it influenced their lives. The later two books aren't interesting to readers below high school age; I have heard from people who read them in their early teens and didn't like them, and then when they read the new edition as adults they thought I must have done a lot of revising. Actually I revised them only to eliminate sexist phrasing and statements about computers that were outdated.

Like all my books, this one has never reached many of the readers for whom it was intended. When these three novels first came out science fiction publications didn't review them because they were YA books; then when the omnibus appeared as adult SF they didn't review them because they were reprints. However, my novels rarely reach the readers most apt to like them in any case. They aren't typical science fiction, and their most enthusiastic fans are generally people who don't read other science fictiion and don't look at that category when browsing. I don't like the genre system! Books should be judged on their individual qualities, not on whether they fit the mass-market standards of particular in-groups. But with the number of new books now being published each year, there's no way to avoid categorization.

There's a lot information aboout the story, and why 8 years passed between the original publlication of the second and third books of the trilogy, at my website. Briefly, I hadn't planned to write the third, but something happened that i felt made it imperative. That book is about genetic engineering, something I'd known nothing about when I wrote the others, and it affected their main premise. I didn't want readers to think I'd knowingly justified a bad social system on false grounds. So don't read the first two novels without going on to the third!