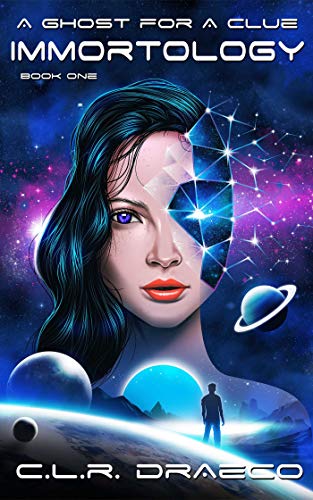 Book: A Ghost for a Clue (IMMORTOLOGY Book 1) by C.L.R. Draeco

about this book: Ghosts are clues. Like smoke or a scream or the smell of gunpowder, they're evidence you couldn't hold in your hand. But despite the number of people who have seen them, science still shrugs them all away as make-believe.

That's the reason I wrote this book. I wanted to follow the trail of clues and find an explanation. Not the usual scientific explanation that dismisses all such phenomena as products of hallucinations or infrasound or the power of suggestion. "A Ghost for a Clue," the first book in the Immortology series, is a work of science fiction interwoven with years-worth of research behind the possible reality of ghosts and souls.

My first challenge in putting together the story was how to get well-educated and accomplished people involved in the study of the afterlife and have them take it seriously. The entire book is seen through the eyes of two main characters: Bram Morrison, a robotics engineer, and Torula Jackson, a botanist. Because of their curiosity—and their backgrounds—readers get a rare mix of real science as a backdrop to their foray into the supernatural.