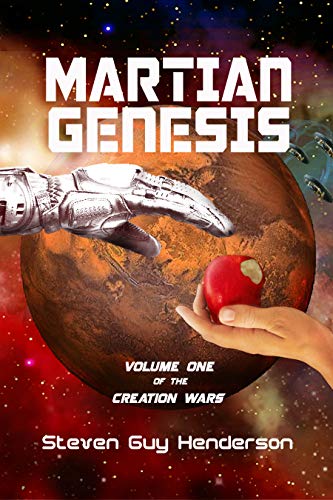 Book: Martian Genesis - Volume One of the Creation Wars by Steven Henderson

about this book: An abandoned alien base
A cryptic message
A world on the brink of war
An adventure through time

Before Creation began there was war. Those of The First, known to us as angels, fought among themselves and a universe in the making was ripped creating fractures that exist up to the present time. Aiden Gunn, anthropology professor and former Army ranger lost his grandfather in the jungles of the Yucatan twenty years earlier. But when an ancient alien edifice is discovered on Mars and a cryptic three-and-a-half billion year old message from Aiden's grandfather to young Aiden is discovered, Aiden and his graduate student Susan are sent to Mars to begin a journey back in time to the origin of the alien base. There they learn of the great war between the angels and of their continuing battle and the role of humankind in that struggle.

The novel came about from a question and a statement I have heard many times over my years. The question? How can there be a god, much less a good god, in the presence of so much evil? The statement: you don't need a god to explain the universe when you have science. I like to think this novel blends those together in a plausible, action filled explanation of just how you can have science and religion together and how a good god can exist in a universe full of evil. This is not an attempt to convert anyone to a particular faith or viewpoint. This is my attempt, through an adventure novel, to explain the contradictions we see in our lives and hopefully offer readers an alternative perspective on why things might be the way they are. It is my hope that my novel will do what most fiction novels aspire to do; to allow the reader to see the universe through new eyes, and to think on things that might or could be.