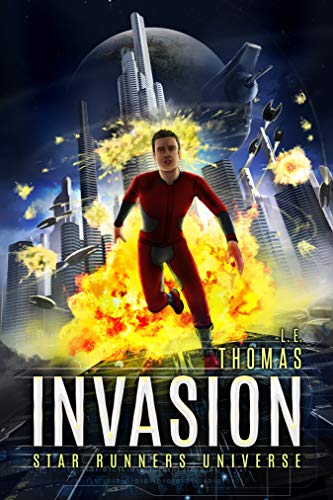 about this book: A new book in the Star Runners Universe!

I always love writing that sentence.

The title is Invasion. When I first set out to write in the Star Runners Universe, I wanted to write from the point of view of three different people on three planets throughout the galaxy. Earth native Austin Stone was first with the Star Runners series (now five books in).

But I always wondered what it would be like to see the experiences of a young man not born on Earth. What would have happened to Austin if the Zahl Empire had recruited him instead of the Galactic Legion? The answer transpires in Invasion.

Nat Hodges is about the same age as Austin when Invasion begins. In the first chapter, his father forces him out of their home during an invasion from the heavens. Who is it? They have no idea, but they see their home city in the distance being attacked.

Here is a snippet from chapter 1:

Fighter jets of some kind soared across the cityscape, crimson laser blasts spitting from the wings. Bombs fell. Emerald laser fire sprayed skyward across the bay, missing the attackers. They pulled up as a tall plume of smoke and flame shot into the air, their horseshoe shape glistening in the sunlight. A concussion wave rippled through the buildings. Fires raged in the streets of Greeva.

...A mushroom cloud appeared over the horizon, rising into the atmosphere. More blasts fell, pounding the ground on the far side of Greeva Bay where the military base stood. Nat spent most of his life dreaming about serving on the base now burning on the horizon. He couldn't move. It was as if the window had a magnetic pull, drawing him to the chaotic scene unfolding in his hometown...

...Nat twisted around in the seat, looking back toward Greeva. Two skyscrapers burned. A copter, flames wrapping around the tail, crashed into one building. The highway between them and the city clogged with traffic. Hundreds fled the chaos on foot, sprinting across the Bay Bridge and climbing over stopped cars. Screams echoed over the cacophony. To the left, an enemy fighter dropped low over the ocean, flying fast for the bridge.

Glancing back to the surging crowd crossing between traffic, he clenched his teeth.  Two missiles dropped from the fighter's wing. A half-second later, they ignited and shot toward the bridge. They struck the primary foundations of the ancient structure—the path to so many celebrations of his youth when his family would head into town to watch the Overlords play or for Ma to see the opera. Stone and fire swirled together. A shockwave rippled from the foundations, disturbing the surrounding water, and the bridge hovered for a terrible, deadly instant.

And then it crashed.

Support beams buckled and squealed under the strain as the structure split down the middle. Vehicles and people fell. Steel, blood, and bone came together, falling into the blackwater of Greeva Bay.

Trying to gather the rest of their family, Nat's sister Tressa and his mother, the Hodges flee their homes for the mountains and safety. But deep down they realize their world has changed forever.

Invasion is about the aftermath of a Zahlian Invasion. It is a standalone entry point to the Star Runners Universe allowing you to witness the story of an occupied planet on the other side of the known galaxy, far from the safety of Earth.