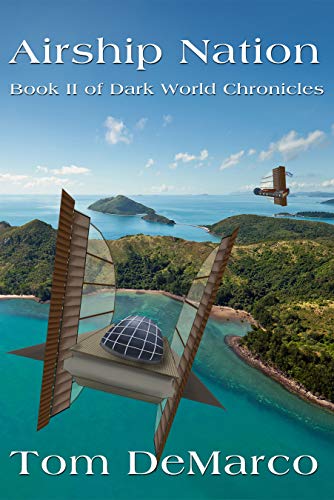 about this book: About Dark World Chronicles
The world has gone dark. Nothing works. Cars and trucks and airplanes and guns and bombs are nothing more than paperweights. A mysterious disturbance propagated onto the earth's magnetic field has the effect of inhibiting all explosions. It has repealed most of the twentieth and twenty-first centuries, leaving the world as it was in your great great grandparents' time.

The villain (or hero, depending on your perspective) who has made this happen is the physicist Homer Layton. He must be destroyed. And his stupid machine that injects the disturbance must be destroyed. Because without it we can never have another real war. This is unacceptable. Fortunes of treasure and innovation have been invested in war materiel, all of it now useless. Most people would like to have their cars and computers and televisions working again, but that's not what really matters. What really matters is that governments cannot get on with the business of war. The power elites around the world have determined to track down Layton and his little colony of war opponents and smash them. Then the nuclear war that was just about to happen when he turned on his damnable machine can finally get started . . .

Airship Nation
Book II of Dark World Chronicles
Homer Layton's young protégé, Loren Martine, is now charged with the defense of the Baracoa colony and preservation of the Layton Effect transmitter that has made the world go dark. He knows an attack is imminent, that the colony's success in defeating the earlier attack will not be so easily repeated. The shadowy Rupert Paule in Washington is determined to pulverize them. His forces will come again, under sail, and Loren's few sailing vessels will have to be quick to repel them. He sets out to invent a more effective keel to make his boats sail higher and faster. The invention he comes up with is staggering: a variation of the Layton Effect causes a drastic local slowing of the flow of time in one dimension, so a keel which is free to move forward and back and up and down is effectively locked in its plane from side to side. His sailing craft will not slip to windward and they won't heal over in the wind. To his utter astonishment, he discovers that the keel also works when turned on its side. It is falling, but so slowly as not to be noticed due locally modified time in the vertical dimension. The vertical keel floats in the air like a skyhook. He and his colleagues set out to use the new technology to fashion a fleet of airships. The airships are propelled by wind and held aloft by Layton Effect transmitters. What this changes is only everything. Let the enemy come in their ridiculous old-fashioned ships. Loren will defeat them from above.