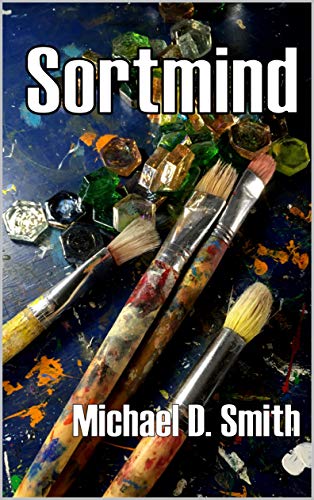 about this book: Trantor Group CEO Peter Trantor scrambles to reassure his latest client, the lovely but unreadable bank executive Anna Winstead, that his telepathic Sortmind app really isn't as deadly as people assume. But he has some explaining to do when a newly-hired programmer at Trantor, Mindwiped by Sortmind abuse, proclaims himself an alien from the planet Cnzaar.

High school art students Oliver Perrine, a survivor of the terrorist bombing of the downtown library, and Sam Emersonn, coolly pragmatic and politically aware, struggle to define themselves against their fascist fathers, the founders of the reviled Citizens Against Telepathy, as its soldiers engage in street battles with its rival, the fanatic Open Telepathy Foundation.

Architect and reluctant CAT political activist Mitchell Emersonn telepathically reviews his girlfriend Shelley's files after she too declares she's an alien from Cnzaar. A library clerk invents hallucinogenic Concentrated Telepathic Tablets and spreads them to the Canterra Art Institute, where Sam and Oliver consume the drug and find themselves confronting Sortmind's unnerving redefinition of reality.

Sam's fifteen-year-old sister Teresa discovers she's a secret link between generations of mystical artists, and that she and Oliver belong to a clandestine society of Tree Leopards. But two opposing sets of aliens alternately kidnap Oliver, each pleading for the impenetrable Tree Leopard Society to assist in their war against each other. Frenzied militias attack the Trantor Building's Sortmind servers and the app begins evaporating, leaving Oliver to sort out his adolescent fantasies and discover what's real.

Though it's probably not the most successful marketing scheme to discuss the massive failures of the early versions of this novel, the story of the endless revisions and the final total refresh of the novel seems necessary to explore here. A completely reengineered Sortmind has transformed a decades-old vision into my modern themes.

My initial 1987 urge for this novel was to pour absolutely everything I could think of, including a previously aborted novel, college short stories, and my day career as a librarian into a grand Bildungsroman about teenagers, artists, architecture, alien invasion, libraries, hysterical politics, and urban warfare. I'd written seven novels before this one, but Sortmind was the first time the characters really went deep.

But the book's initial typewritten draft of some 300,000 words plunged through numerous unfocused themes and detours, undergoing dozens of revisions and obsessive tweakings over three decades. Even as I suspected that it was getting further and further out of date, both technologically and psychically, I loyally kept slapping new paint on it, tuning it up with all sorts of literary tricks, at one point trying to recast its bloat as a trilogy. I abandoned it at least twice. The first drafts came so long ago that my concept of the Telepathic Database was my premonition of an Internet that as yet had not come to the forefront of society's attention.

But over the years and successive drafts, with scores of query letters and sample chapters sent to publishers, I kept stifling my ongoing unease at the amount of needless history, rambling subthemes, and numbing exposition. The datedness of the original plot was so apparent, along with the petty architectural wars and a South Sea island terrorist bombing back story, that the very amount of hassle trying to fix it should have shown me much earlier how defunct it all was. Was I just holding onto the novel out of nostalgia and the fact that my website bears its name?

But I kept returning to the book because there was something important here, especially the friendship of Oliver and Sam, two teenagers of opposing temperaments who truly mature during the story. Was there a way to surgically remove the exposition and keep the strong parts of the novel? From 2011 on I kept a Sortmind Diary which explored in detail everything that might be necessary to "reboot the franchise," a phrase applied to the newer Star Trek movies which struck me as particularly apt for my situation. Not just one more cosmetic draft, but a total overhaul.

The major change was eliminating the focus on the life of the library in favor of a startup software company, the Trantor Group, which forced substantial revision of every chapter and wiped all trace of library career concerns, stale plot, and authorial opinions left over from the eighties and nineties. I went for a straight chronology covering a period of two months, removing all structural weaknesses and the cumbersome flashback sequences, which usually just irritate and confuse the reader anyway. The overall plot is clean and the book is its perfect length at a fast-moving 133,000 words, 44% of the original.

And it finally, really, works! I'm surprised at how well the 2019 Sortmind transforms the old version into a modern plot that nevertheless fully brings out all my ancient archetypes--the teenagers, the coming of age story, the adults and their romances, the social politics insanity, the software gurus and their strivings, the confrontation with unknown psychic forces, Oliver finally surmounting his feckless irresponsibility and both he and Sam daring to grow in ways they'd never thought possible.