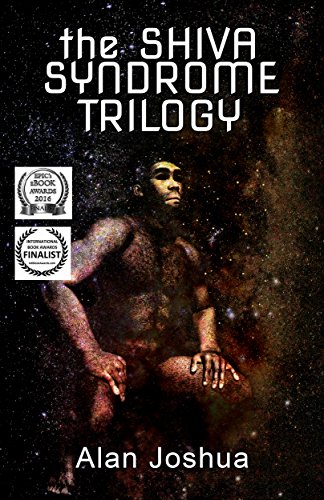 Book: The SHIVA Syndrome Trilogy (The Mind of Stefan Dürr, The Cosmic Ape, The Interdimensional Nexus) by Alan Joshua

about this book: The SHIVA Syndrome Trilogy is the product of years of research and writing. It was inspired by my research into "psychic healing" and other factual paranormal abilities. It is the story of science enhancing underlying human abilities, pushing them to the edge. It is the saga of Beau Walker.

More than a scientist, more than the offspring of a Mohawk--African American interracial marriage--and far more than human, Beau Walker holds the key to human evolution…and its annihilation. A disgraced researcher, Walker is snatched by the military and forced to join a U.S./Russian scientific team, searching for the cause of the disaster. Beginning with a terrifying descent into the mile-deep Russian crater where Walker finds an American astronaut's arm, he is hurled into the worlds of advanced biotechnology, biowarfare, paranormal research, and military intrigue.

The stakes are unimaginable: Find and control the cause of the events or face planet-wide obliteration.

PORTLAND BOOK REVIEW: "Having the right amount of adventure and romance, this crisscrossing genre tale isn't just a good read, but may also look great on a big screen."

MIDWEST BOOK REVIEW: "Highly recommended, indeed; especially for thriller and sci-fi readers who have become deluged with too much predictability and who seek cutting-edge action, believable protagonists, and action that is solidly intense throughout."

IND'TALE MAGAZINE: "a riveting, page-turner, right from the start!"

PHENOMENA MAGAZINE: "Well plotted and written, this is an absolute thrill ride of a book that is almost impossible to put down: it might also cause the reader to wonder what really does go on (MK-Ultra for example) in some of the secret government laboratories dotted around the world."

Amazon and Goodreads Readers:
"The Shiva Syndrome is in the top 10 books of the best sci-fi/fantasy books I have read in over 40 years and I read over 200 books a year!"

"Let's get straight to the point: The SHIVA Syndrome Trilogy is one of the best-written stories I've read in years."

"I would recommend this book to anyone who is looking for a science fiction journey that is so well researched that it truly could be happening right now! This was one book that caused me to rethink what happens behind closed doors."