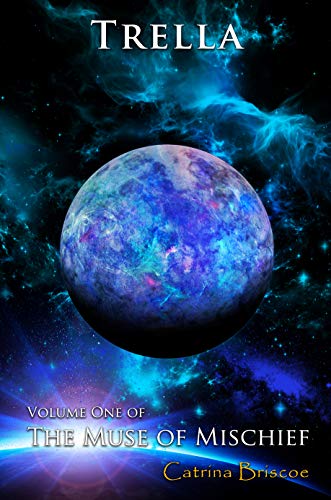 Book: Volume One of The Muse of Mischief - Trella by Catrina Briscoe

about this book: The Muse of Mischief is a super heroine like no other! She's a crime fighting, time traveling alien that was hidden on Earth as a child. She has super human strength and the ability to travel through space and time.

Now she travels the Universe with her faithful companion Agent Brzko, fighting crime and helping those in need - all while trying to figure out who and what she is. Why was she hidden on Earth to be raised by humans? Is it because she's being hunted by the VReoria?

She's female but not feeble! Not just a female version of a male superhero, M will have you eagerly turning the pages. She runs with aliens like you've never seen, to places you've never dreamed of. Like the Planet of Portals - each portal is a one way door to somewhere. Some of them even lead to random places.

Join the Muse of Mischief on her adventures as she rescues the Rogsaars and gets them home and subdues the evil villain known as the Brusher, and more...