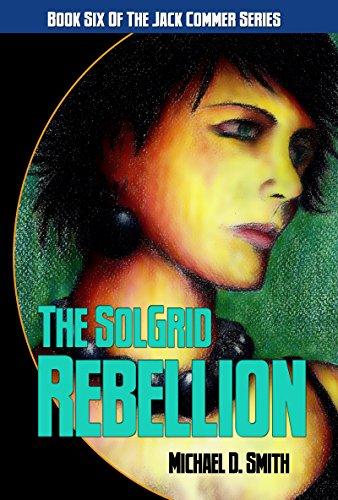 about this book: Book Six of the Jack Commer, Supreme Commander series expands a theme introduced in the previous novels, the possibilities of true telepathic understanding among an entire race versus the fascist control of that telepathic system in the name of defending against hostile aliens. When the solar system adopts the buggy SolGrid telepathic network designed by former United System Space Force officer Patrick James, Jack Commer's charismatic but troubled son Jonathan James instigates a rebellion against what he considers brainwashing. His followers include his lover Suzette Borman, exobiologist Jackie Vespertine, SolGrid First Assistant Sanders Hirte, and warrior dog Trotter.

Pat is smitten with the voluptuous Suzette and, finally admitting that his SolGrid is dysfunctional, he accepts a place in the Rebellion to be close to her. But he's stunned when Jonathan James storms a museum orbiting Saturn's moon Enceladus and not only steals Typhoon II, Jack Commer's ancient 2030's spaceship, but also kidnaps Martian Emperor Z'B.

Jack follows in Typhoon VI to capture his son, but is stymied when his ego-bloated navigator Rick Ballard mutinies, taking the ship's physician hostage and flying to the SolGrid Rebellion on the dead planet Altrouda to overthrow Jonathan James and proclaim himself the new fascist Alpha Centaurian Emperor. Typhoon VI's computer system decides to arrest Jack and haul him back to a court-martial on Mars, where USSF Detention Services head Carla Posttner has declared martial law in the face of the SolGrid catastrophe and made herself Dictator of Sol. On Altrouda, Pat's former SolGrid programmer Sanders Hirte begins to comprehend the bizarre software despoiling his mind.

Since the publisher used one of my character images for the cover of Book Five, The Wounded Frontier, I wondered if one of mine might again be used for Book Six, and even before I knew the publication date for The SolGrid Rebellion I was working on colored pencil and watercolor versions of another important character, Jackie Vespertine, copilot Joe Commer's femme fatale from Book Three, Nonprofit Chronowar. I was flattered that publisher Deron Douglas of Double Dragon Publishing again asked me to do the cover, and the resulting image, with my Jackie drawing within Deron's design, is radiant. Jackie is one of the main rebels against her ex-boyfriend's broken SolGrid, and she's inexplicably renounced a professorship of exobiology and her work with a newly discovered alien species. Her own themes of rejuvenated life energy, and where next to take her seventy-six-year-old self, are central to the book.