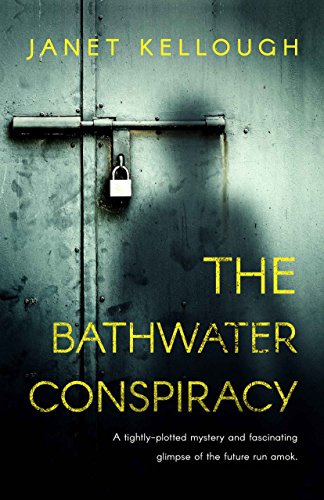 about this book: Nothing about this case makes sense.

Detective Carson "Mac" MacHenry can't figure out why the Darmes are so interested in this one dead girl or why the secretive federal police have rushed the autopsy or why, a few days later, the records of the dead girl's murder have been erased from all official government channels.

Even stranger to the detective is the manner of death – injuries consistent with a violent beating and sexual assault. Crimes rarely seen in current society. Crimes eradicated decades earlier.

The Bathwater Conspiracy follows Mac and her partner Nguyen as they wander a dystopian post-apocalyptic cityscape in search of clues to Alfreda Longwell's murder. Their off-the-books investigation leads them from the halls of Alfreda's university to the Decayed Area, a blasted wasteland at the city's edge where technophobic religious fundamentalists struggle with scavengers and lunatics in a never-ending fight for survival.

When the pair discovers a secret government project gone horribly wrong, they must work to uncover the details of a plot which will rock the already fragile political landscape of the city to its core…

Janet Kellough's latest novel offers a tightly-plotted mystery and a fascinating glimpse at genetic engineering run amok in a near-future world. Touching on issues of bioethics, gender, religion, and more, The Bathwater Conspiracy will appeal to fans of science fiction, post-apocalyptic fiction, and police procedurals alike.

About the Author:
Janet Kellough is a storyteller and author of The Thaddeus Lewis Mystery Series, The Palace of the Moon, The Pear Shaped Woman, and the Legendary Guide to Prince Edward County. She lives in Ontario, Canada with a husband, miscellaneous critters, and thousands of red cedar trees.