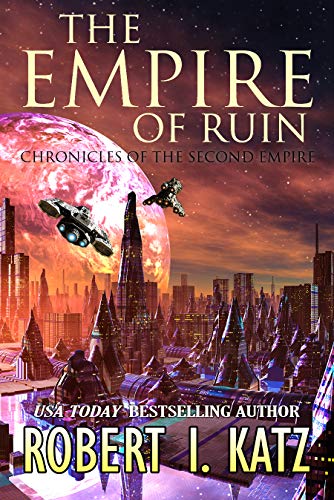 about this book: The protagonist of The Empire of Ruin is a former soldier named Michael Glover, who was introduced in the previous book, The Empire of Dust. Michael Glover was a soldier of the First Empire, who was forgotten after a devastating civil war and was awakened after two thousand years, to find a new Empire rising from the ashes of the first.

In this book, Michael Glover and his crew accept a commission from Naval Intelligence to try to track the origins of the slaver network, which is causing devastation throughout the Second Empire.

The Empire is under siege. Unknown adversaries are attacking its worlds and habitats and then vanishing into space.

I love the idea of a galaxy spanning civilization. The fact that it's the second such civilization makes it even better, because there are hundreds of worlds, lost, forgotten or abandoned, that have gone their own way and have their own goals and agendas. A scenario like this offers almost endless opportunity for books and stories.

A direct sequel to the 3rd book in the series, which expands on the 2nd Empire and the threats against it. Very well written and entertaining story.