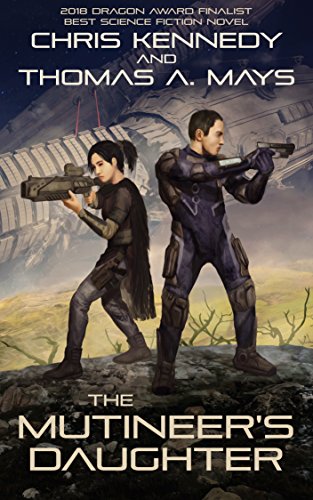 Book: The Mutineer's Daughter (In Revolution Born Book 1) by Chris Kennedy and Thomas A. Mays

about this book: The intersection between hard science fiction, military science fiction, space opera, and young-adult fiction can be a treacherous crossroad to navigate. Not all authors can do it well. And, in this case, it took two: Thomas A. Mays and Chris Kennedy, a pair of naval officers and veteran sci-fi authors. Chris Kennedy, the co-creator of the Four Horsemen Universe of mercenary mil-SF novels as well as the author of the Theogony series has teamed up with Thomas A. Mays, acclaimed author of A Sword Into Darkness, his blockbuster hard-science military sci-fi debut.

Together, they have written THE MUTINEER'S DAUGHTER, a tale of empires and betrayal, of harsh class rivalries, of honor and duty, and of the unbreakable bond between a father and daughter. This epic has already been described as "railgun-buckling space opera with a difference," and as having "the soul of a Heinlein juvenile, with the hard science of Alastair Reynolds." Reviewers have praised their deep, complex characterization, the moral nuance of the decisions the characters make in regards to mutiny and revolution, and -- of course -- the amazing scenes of combat, both on the ground and in space above. Readers are already clambering for the sequel!

This is the story of Chief Warrant Officer Benno Sanchez, fighting in a war against the Terran Union aboard the space-going destroyer PULLER, and of his 14-year-old daughter Mio, trying to cope on their colony world of Adelaide. But when Benno's Alliance abandons his homeworld and allows the Terrans to occupy it, he will have to decide what matters more: his duty to his daughter or to his Navy. And Mio, never having known violence before in her life, must suddenly cope with revolution and battle. How far will a father and daughter go to be reunited?