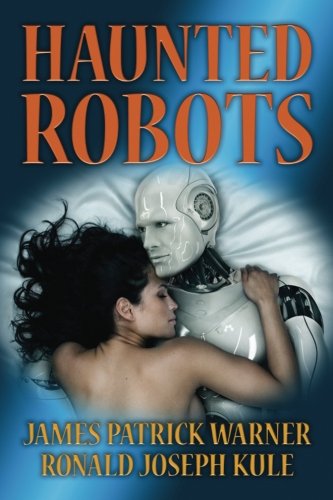 about this book: What if you were murdered and you found yourself still alive, albeit without a body? How would you let others know you were still there? If you could communicate to your friends, would they recognize you if you did it through a robot or android body?

Imagine a director of a robotics manufacturing facility in the same position. And then imagine that some of the other robots are already inhabited by other beings, who also had died.

Now imagine the agenda that would be pursued when the purchasing client, the U.S. military, discovered that some of their robots were "haunted! What would be the outcome?

And who would survive the climactic ending, after both sides discover there is a hidden third party among them, an other-world entity with an agenda that makes theirs look puny in comparison?!

HAUNTED ROBOTS delivers the answers in a fast-paced, FUN story line that is both believable and imaginative. You'll be telling your friends to go out and buy and read this one, which is only the first in the forthcoming series!

READER REVIEW: "Lucky me... I just read Haunted Robots. This fast-paced story not only got under my skin..." -- Tracy Repchuk, #1 Amazon.com Best Selling Author