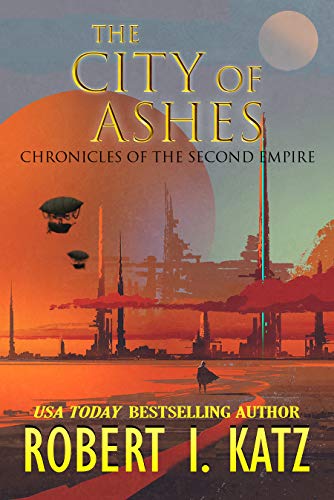 Book: The City of Ashes - Chronicles of the Second Empire Book 2 by Robert I. Katz

about this book: Douglas Oliver has survived the siege of Aphelion but the threat posed by the nation of Gath is far from over.

Every five years, Gath sponsors a Grand Tournament, where future leaders are pitted against each other in a series of violent contests. No outsider has ever won the Grand Tournament. Douglas Oliver is determined to change that.

All across the continent, nations are making alliances and choosing sides. War is coming, and Douglas Oliver's participation in the Grand Tournament represents the opening gambit. Meridien intends to win the game that Gath has started, and Douglas Oliver is his country's chosen weapon.

The City of Ashes is the second book in The Chronicles of the Second Interstellar Empire of Mandkind, following The Game Players of Meridien. I've always loved "big" science fiction, the stuff that spans light years of space and millennia of time. When I started this series, I deliberately set out to create a Universe that offered almost limitless scope for new stories. The First Interstellar Empire lasted for four thousand years, comprised over two thousand worlds and was a force for stability in the galaxy, but the First Empire fell over two thousand years ago, following a debilitating war with an alien species and an attempted takeover by a disaffected general. Now, the Second Empire is rising. It's smaller and less technologically advanced than its predecessor, but there are a lot of lost worlds and out-of-the-way places for interesting things to happen.