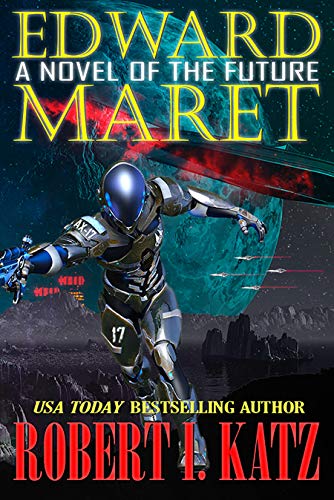 Book: Edward Maret - A Novel of the Future by Robert I. Katz

about this book: A futuristic tale of Passion, Intrigue...and Murder.

The impending marriage of Edward Maret, heir to an ancient family fortune, leads to a complex intrigue involving jealousy, multiple betrayals, false identities, desperate escapes and long-cherished revenge. EDWARD MARET: A NOVEL OF THE FUTURE, offers all these elements and more. The story opens on the eve of Edward's wedding to Joanna Langley and swiftly leads to Edward's betrayal by his cousin Philip, who is envious of Edward's position as the heir to the estate of Airlie, and Vincent FitzMichael, who is in love with Edward's fiancée. With the unknowing help of Jason Deseret, a police inspector with a dangerous secret of his own, Philip and Vincent's plan succeeds beyond their wildest dreams. Edward Maret disappears. His memories stolen from him, his face and body mutilated beyond recognition, Edward Maret is converted into the half-human, half-robotic cyborg, AX-17, and forced to serve the human Consortium, first against its own rebellious citizens, then against the Kliya, a race of reptilian aliens whose relentless expansion into the galactic arm is impeded by human space. Cyborg AX-17 has no choice but to obey the orders of his masters, until AX-17 is unexpectedly set free, and Edward Maret returns, to seek revenge against the men who betrayed him.