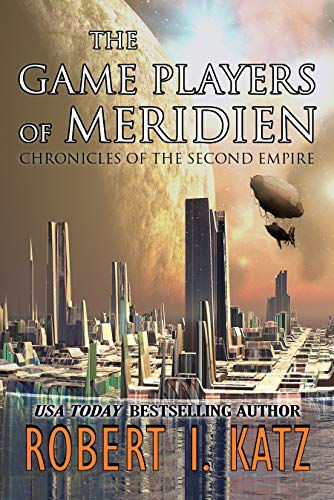 Book: The Game Players of Meridien - Chronicles of the Second Empire by Robert I. Katz

It's more than six thousand years in the future. The First Interstellar Empire of Mankind lasted for four thousand years, but fell after a series of wars with an alien race and a revolt by a renegade general. A two thousand year interregnum followed. Now, the Second Interstellar Empire, in existence for approximately five hundred years, is attempting to recover the lost worlds of the First Empire.

The protagonist of this book is Douglas Oliver, an up-and-coming industrialist in the nation of Meridien on the world of Illyria. Illyria was once one of the hundred most important worlds of the First Empire. It was settled by genetically engineered humans designed to be strong, fast and aggressive. Illyrians were the best soldiers in the Empire. They loved competition and they loved to play games.

Douglas Oliver is very good at games, but in Meridien, the greatest game is the game of life. Meridien society is organized into Guilds, which provide financial and sometimes military support to its members and ensure that the competition doesn't get too bloody.

Douglas Oliver doesn't mind being challenged. He enjoys it, until a challenge arrives from an unknown agent and suddenly, the Game becomes an all out war where the stakes are survival for Douglas Oliver, Meridien and the entire world.