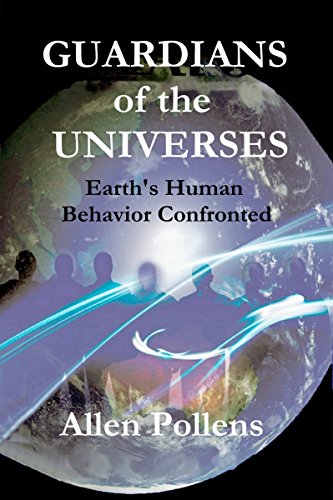 Book: GUARDIANS of the UNIVERSES - Earth by Allen L Pollens

about this book: Guardians of the Universes Patience with Earth's Humanity Is at an End

In "Guardians of the Universes," an apocalyptic sci-fi epic, seven Guardians of the Universes confront Earth's human behavior. They demand significant change to avert final consequences. The seven hold an eighth Guardian, Earth's creator, accountable. Summoned to witness the inquiry, historian Thomas Scribner embarks on a twenty-five year mission to save humanity from erasure.

Beaverton, Oregon, October 01, 2017: Thomas Scribner experiences the Guardians' threatened final action in New York City. The mark of the Creator is on him. His mission is real. Thomas carries the weight of the world's future. He hopes he is up to saving humankind.

Thomas Scribner stands before a panel of seven judges. They have called on him to act as observer of the court's investigation into conditions on Earth. The seven Guardian judges question Eight, Creator, as they consider possible courses of action. Eight requests permission to tell his story from the beginning. After some debate, the guardians allow it.

The court events interweave with Scribner's activities on return from the court. Thomas begins writing "Words of the Creator," the chosen method for conveying Creator's message. He presents the Credo of acceptable human conduct in Chapter One. Scribner finishes at the court with a one-on-one conversation with Creator and begins his odyssey into the maelstrom of world events and Creator interventions.

The men and women with roles in the developing saga struggle to communicate the message of "Words of the Creator." Along the way, they marry, have children, and address family issues. Countries and people remain divided. Differences foment wars. Shortages exacerbate hostilities and corporations gain increasing control of governments. Scribner's book forewarns of Creator actions in 2025 and 2035 if necessary changes in human behavior do not occur. Intervention beyond this point will mean eradication.

Guardians of the Universes, $2.99 Kindle eBook, $15.99 in paperback: Search on "Allen Pollens Books" at Amazon.com or use this link: https://tinyurl.com/y7tzxjmg
Author Allen Pollens has been telling stories his whole life. His children and grandchildren were ready audiences who assumed he could deliver a new tale on demand. Generally, he did. Al Pollens has authored more than a dozen books of various genres.