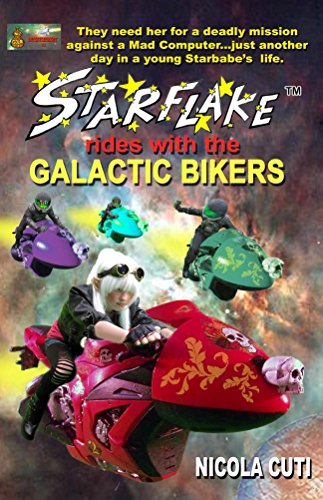 about this book: Starflake, the Cosmic Sprite who can live in outer space without any life support, is saved from certain death by a group of four rogue Bikers who have broken away from the Deep Space Rangers. The are on the way to an alien planet, Kafka, in order to rescue their fellow cadets held captive by a mad computer. Because the computer has surrounded himself with deadly gases and can only be reached by a narrow tunnel, the Bikers recruit Starflake to aid them in their rescue efforts. Her teacher, the Great Jelly, Bonoguro, is reluctant to allow Star on such a dangerous mission but the Sprite intends to go with or without her mentor's blessings and within hours she is off with the four Bikers, Striker, the leader, Stone, the enforcer, Lydia the tattooed but intelligent second in command and Rage the angry rebel. Star soon learns that the problems for a successful rescue arise from the Bikers themselves as well as from outside forces.

I wrote this book series to give young girls a heroine they could admire and use as a role model. At the same time, I wanted to show that adventure was not exclusively for boys. At a convention, my partner, NIKOMA DeMITRO mentioned to me that I had written science fiction for adults and for boys, why didn't I do a series for girls and so Starflake was born.

Starflake is a very adventurous character. This series is a good read for all ages and both boys and girls. Can't wait to read her next adventure! [by Kat Hebert]