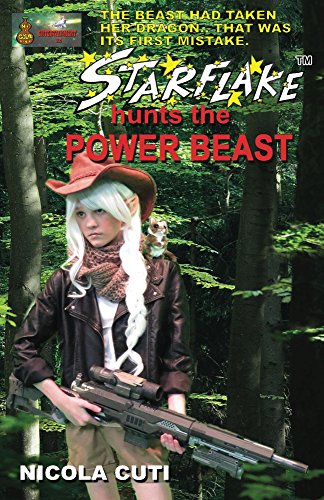 about this book: The Power Beast, a glowing creature who drains worlds of all of their power, attacks Starflake, the Cosmic Sprite who can live in outer space without any life support. The unseeable beast escapes on Star's beloved pet, the dragon, whose great wings sustain flight using solar power. This was the Power Beast's first mistake. Armed with her most powerful rifle blaster, Star is in pursuit and is determined to get her dragon back. She teams with the intergalactic hunter, Beowulf Gent, who, for reasons of his own is also tracking the Power Beast. Along the way Star encounters Mother, the creator of life on alien worlds. Mother wants to use Star as her prototype to form a batch of Cosmic Sprites but is only able to spawn Tarsa, a tarsier monkey who can predict the future in poems and Constellation, who will become Star's greatest foe. Finally, the Power Beast is trapped in the winding caverns of a jungle planet. Star and Gent go after her but, as always, will the hunter stay the hunter or will they become the prey of their violent quarry?

At a convention, my partner, NIKOMA DeMITRO mentioned to me that I had written science fiction for adults and for boys, why didn't I do a series for girls and so Starflake was born.

Kids First! Comments on Starflake's previous adventure "Starflake rides with the Galactic Bikers." " The characters are the strongest aspect of the film but the story line is also creative and flows well from beginning to end."

My favorite Starflake book so far

I have enjoyed all the Starflake books but this one is my favorite. The ending was quite a surprise. I think this series would be enjoyable to both girls and boys. [by Kat Hebert]