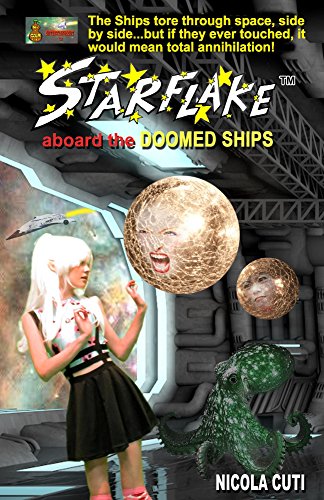 Book Review: Starflake aboard the Doomed Ships by Nicola Cuti

about this book: This is the most complex adventure to date with Starflake, the Cosmic Sprite who can live in outer space without any life support. Star encounters a starship from a dimension of anti-matter, which is closely attached to a matter starship call Alpha Centauri. By riding alongside each other there is no danger but if they ever touched they would annihilate each other. Star is able to transform herself into anti-matter and board the alien starship called Beta Centauri. There she encounters creatures who are balloon people, intelligent and gentle. She also meets with her older self, Tauristar, who has also been pulled from the anti-matter dimension. Anti-gravity is the only way to keep matter and anti-matter from the fatal touching but gravity is the weakest force and can be overcome. Using her wits and courage, Star is able to navigate between the two ships, however, diplomacy may not be enough. The Alpha Centauri is considering sending lifeboats into the Beta Centauri in order to blow it out of existence. Only the newly formed friendship of Star and Tauristar might be able to avert this disaster.

At a convention, my partner, NIKOMA DeMITRO mentioned to me that I had written science fiction for adults and for boys, why didn't I do a series for girls and so Starflake was born.

Kids First! Comments on Starflake's previous adventure "Starflake rides with the Galactic Bikers." " The characters are the strongest aspect of the film but the story line is also creative and flows well from beginning to end."

The Starflake series just gets better and better. This was pretty complex but written in a way that is enjoyable to readers young and old. Hope to see more about Tauristar in the next book. [by Kat Hebert]