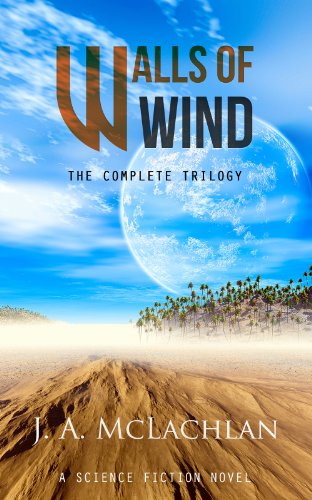 Book: Walls of Wind - The Complete Trilogy by J. A. McLachlan

about this book: Walls of Wind is a science fiction novel that takes place on an alien world named Wind, on which there are two sentient species at the top of the food chain: the Ghen and the Bria.

I wrote this novel in order to explore the difficulty we have understanding one another, even when the will to do so is there. What are the differences that divide us and what are the similarities we often overlook? What kind of situations tend to increase that sense of difference and what type of situations create unity? Because the Ghen and the Bria on Wind have very different physical attributes, they have developed different cultures, religions and languages – yet I wanted them to have to live together, so I made them reproductively symbiotic. Although one species carries and nurtures the infants of both, while the other species is physically suited to build and guard the walls of their city-state, there are no genders—the Ghen and Bria are different species, not males and females of the same species. This enabled me to examine gender from a unique perspective, also.

A novel, however, must have a gripping story with compelling, fully-formed characters, not simply be a vehicle for ideas. Briarris begins by wanting the Ghen evicted from their city-state, but as the story unfolds Briarris' understanding changes. Working with a small group of Bria and Ghen, Briarris struggles to save their city from being torn apart by the terrible secret at its core as well as from the new threat of a fierce predator just outside their walls.

• "Look out, C. J. Cherryh! Step aside, Hal Clement! There's a new master of truly alien SF, and her name is J. A. McLachlan. THE WALLS OF WIND is doubtless THE debut novel of the year." — Hugo award-winning Author Robert J. Sawyer

• "WALLS OF WIND boldly weaves anthropology, psychology, drama, future history, even meteorology, into a tapestry epiphanies that propel McLachlan's characters toward a necessary and illuminating change in their collective relationship. ... If you read no other "alien" authors this year, don't miss WALLS OF WIND." — Bookreporter

• "Reminiscent of Sheri Tepper and Ursula le Guin. What a marvelous and totally alien story. I was sorry it ended." — Amazon reviewer