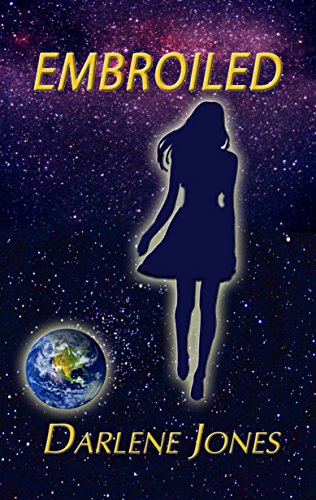 about this book: My childhood dream was to write "a" novel. I did that (EMBATTLED), but to my utter astonishment I ended up writing four novels to complete of the saga of Em and Yves.

Yves is a being from "out there somewhere" who is tasked with fixing Earth. There's only one little problem. He's a rookie. Of course he messes up. Yves is not allowed to come to Earth and do the job himself. Instead he has agents to do the work for him. Each human he picks suffers with his bumbling.

But, the love story in this Sci-fi series deserves a happy ending and I've obliged with EMBROILED as Yves brings his human to his planet with the intention of keeping her there forever. But what the human in question has to say about that might be a different story.

Embroiled, as the last book of the series, put poetic justice in its proper perspective.

Some of the story line in this book which concludes the series made me very angry. Involving the reader so strongly in the characters' lives is surely the sign of a powerful author. All I will say is that the ending is satisfying in every way."

Other books by Darlene Jones