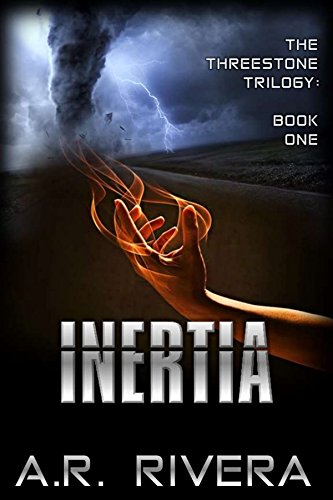 about this book: Inertia is the first of three books in my Sci-Fi adventure Threestone Trilogy.

On the surface, INERTIA is about a thirty-year-old guy named G (short for Gerry), who's at a dead-end in his personal and professional life. He's heartbroken and worried about how he's going to take care of his aging father.

One day, while G is riding the city bus on his way to a job interview, he is assaulted by a sinister man. But before G can react, the bus collides with a diesel fuel truck. G wakes up in the hospital, somehow alive and nearly twenty years in the past!

This sends G on a mission to find out how he ended up in 1996. And while he's trying to find a way home, G tries to stop his teenage self from making a terrible mistake that killed his little sister.

The reviews are few, but extremely positive. One reviewer said reading this book was "Like riding a rollercoaster blindfolded," another described it as "Science Fiction told in the form of a detective novel." For fans of Detective novels, Doctor Who, Back to the Future, LOST, and FRINGE.