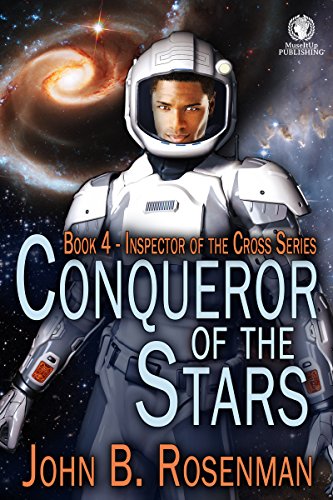 Book: Conqueror of the Stars - Book 4 - Inspector of the Cross Series by John B. Rosenman

about this book: The tagline for the novel is as follows: Turtan travels to a distant world to destroy an enemy base and save humanity—can he succeed?

This is Book 4 in the series and like the others, involves Turtan's struggles to defeat the alien Cen who have ruthlessly brought humanity to the brink of ruin. He has finally found a weapon or device to do this, and he travels all the way with Sky Masterson to the planet Mercontera to test it. If it works, the enemy will be destroyed, but if it doesn't, the human race will end up in the ash bin of history. Which will it be?

I was inspired to write this novel because the Human-Cen war was not over and I felt I had to bring it to completion. And yet the saga will go on after this in sequels because Turtan's full story has still not been told and may never be.

I aimed the book at lovers of science fiction and especially Golden Age science fiction which emphasized wonder and mind-blowing concepts. I hope this novel and the others in the Inspector of the Cross series will WOW and entertain readers. It took nearly a year to write. The title? The others in the series so far had this kind of four word title: NOUN of the NOUN. So I kept that. The word "Conqueror" came at once to me since so much of the series is about conquering. Who will conquer and survive in this violent, hostile universe?

The cover was chosen with the help of Charlotte or C.J. Volnek, a gifted artist who previously did the cover of Book 3 in the series. If you look at the cover, you'll see my vision for it which she captured perfectly. Basically, I wanted to feature my hero against a background of stars.

Since I'm a pantser who makes things up as I go along, one of the hardest things for me in writing this novel was sustaining my confidence that it would work out. I did know the last three words of the novel early on, but not a helluva lot more. I'd like to invite my readers to write me and let me know what they think. My addy is jroseman@cox.net

Video: A Senseless Act of Beauty