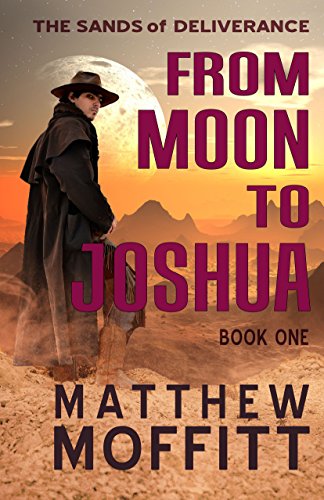 Book: From Moon to Joshua (The Sands of Deliverance Book 1) by Matthew Moffitt

about this book: There is a terror sweeping across the Desert Land and only Drayaden Sinclaire can stop it… that is, if he doesn't become a monster himself.

Although Drayaden, like Roland in The Gunslinger, chases a supernatural force across a wasteland, Moon to Joshua examines the dynamics of an out casted subset of society and explores the subculture of a people who have been labeled the pariah of the human race. Moon to Joshua is also about a man coming to terms with his own demons—what he's willing to accept about himself and the choices he's made; it's about a man's battle with believing in Fate or free will. It's about redemption and its perilous costs.

• "Saddle up for a fascinating mix of adventure and science fiction in this genre bending western filled with intrigue, airships, and rogues exploding with personality." — Jacopo della Quercia, author 'The Great Abraham Lincoln Pocket Watch Conspiracy' and 'License to Quill'

• "Part Science Fiction, part dystopian, part western, Moffitt blends three of the most popular genres seamlessly in his knock out debut. Prepare to enter the world of Drayaden Sinclaire, an enigmatic warrior, the remaining vestige of hope in a landscape of prisoners, murderers, and the innocents caught between. Come ride with Drayaden along the burning desert floor as his world begins to come asunder and he must reckon with his past in order to face his future. As compelling as it clever, MOON TO JOSHUA, is a psychological page-turner that no fan of gritty fiction should pass over." — Duncan B. Barlow, author of THE CITY, AWAKE, OF FLESH AND FUR, and SUPERCELL ANEMIA