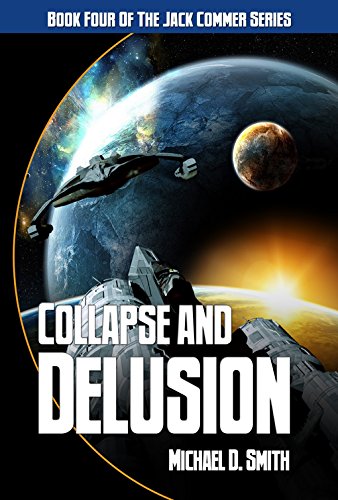 about this book: In Collapse and Delusion, Book Four of the Jack Commer, Supreme Commander series, Jack gets a close look at the disintegration of the Alpha Centaurian Empire in the aftermath of its lost war with the United System Space Force. The book picks up from the last 2033 scene of Book Three, Nonprofit Chronowar, and takes us to 2075, where all the main characters are still in action, thanks to new rejuvenation techniques. Book Three had already promised that all time travel paradoxes would be confined between 2013 and 2075, partially because I was done with trying to keep up with these paradoxes, so aside from a handful mentioned in Collapse and Delusion to move us along the decades, I was happy to get the reader into 2075.

Here former Typhoon II ship's engineer Phil Sperry, a main character in Book Two, Jack Commer, Supreme Commander, struggles with his decades-long treason to the human race. Sperry, damaged by his 2035 Centaurian brainwashing, long ago quit the USSF to become Chief of Staff to Marsport mayor and former Martian terrorist G'rea'nyaigu'nye, a name shortened by human colonists on Mars to Greeney Gooney. At the 2038 wedding of Nonprofit Chronowar characters Urside and Alycia, Phil is finally ashamed of his old obsession with Jack's wife Amav and decides to pursue Earth Animal Rescue Director Hedrona Bhlon in her low-cut gown. But Zarj troopers from Alpha Centauri time-kidnap Phil, Gooney, Hedrona, and the infant Jonathan James to April 2049. Phil again succumbs to the Centaurian Grid, but Hedrona resists and Gooney puts himself into a coma. Considered an Animal, Hedrona must fight as a gladiator for four years. In May 2053, when the Emperor dies and the Grid collapses, Hedrona and Phil rescue Jonathan James. The boy, now five, has a robot attendant, John Root, an irritating recreation of the youngest Commer brother John who died ramming the Typhoon I onto Mercury in 2034.

In 2075 Jack and Amav arrive on the planet Andertwin, formerly of the Alpha Centaurian Empire, to attend their insolent son's literary award party. They've only seen Jonathan James three times since 2053, as he chose to remain on remote Andertwin with Hedrona, Phil, and Greeney. Jonathan James not only survived his abduction but has emerged as the author of a bestselling novel about the 2053 collapse of the Empire.

But now the revived Gooney has declared himself the resurrected Emperor of Alpha Centauri, and Jack listens in shock as the John robot outlines Jonathan James' bestselling novel about the cruel, dimwitted "Hack Blommer's" mistreatment of the glorious "Ronathan Rames Blommer." Can this novel possibly be malware designed to resurrect the fascist Grid of the Alpha Centaurian Empire?