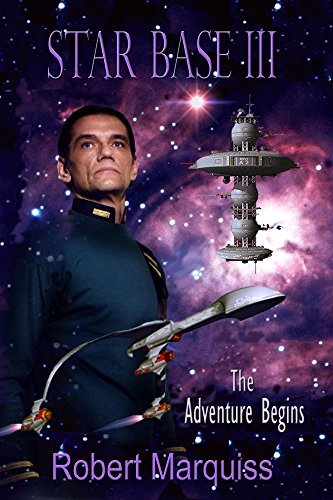 Book: Star Base III - The Adventure Begins by Robert Marquiss

about this book: The story: it’s a Sci-Fi action adventure about Captain Morgan. He’s a star ship captain who has been wrongfully accused at his court marshal and sent out to pasture. Now he’s has been called back to duty. Still in mystery why he’s been called back he reluctantly finds he’s been given the command of the Independence, a star cruiser he feels is out of date. To is surprise he sees how she’s been modified. He’s astounded. His now Ex-O and old time ship mate made sure the ship would meet the Captain’s expectations. Not given his mission orders yet, he finds he needs to acquire a fresh crew since the old Independence's crews have all been reassigned during his long departure. Since he’s been away many things have happened and the recent war that has begun has made crew hard to acquire. Where will they come from? He’s given fresh recruits who have yet to finish their Academy training. Not knowing the perilous journey that lies ahead of him and his crew, he takes it in stride until he gets his orders.

When he receives his orders, Captain Morgan finds he has to rescue the Star Cruiser Orian from a Zadak attack. The Zadak’s have broken their treaty mainly to capture the Orian. They know what’s on board. Crippled from the attack the Star Cruiser Orian lies hidden in the Solomon’s Nebula and now can not communicate with the Star Base. Morgan, looking around at his green crew figures, this is going to be one hell of an adventure.

What inspired me to write this novel was Star Trek. I have watched its creation from the beginning. I’ve always wanted to write an enthralling space adventure and be part of it. The great thing about writing is you get to play every part, every emotion, every feeling of each character. I was so into the story I was thinking about writing that I learned 3D modeling, animation and visual effects, which took some time. I designed, modeled and animated the Colonial Space Station 3 and the Star Cruiser Independence on the cover. Plus many other craft and locations mentioned in the book and created videos of them. I wanted to get a good feeling for them and how they functioned. You could almost say I lived it. I also designed the Captain’s uniform and had a few made. It was a lot of fun.