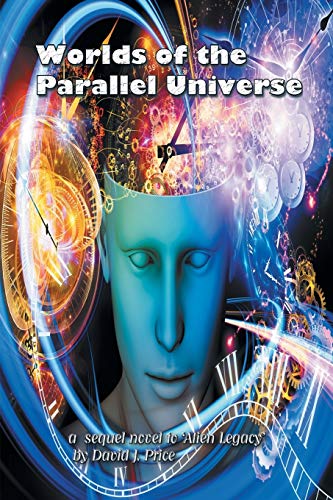 Book: Worlds of the Parallel Universe by David J. Price

about this book: This book is a sequel novel to 'An Alien Legacy:the Cygnus and Pictor connection'

The story synopsis describes it thus:

The year is 2042. The Ancestors have been coerced by their near colonies in the Pictor constellation to investigate a distress signal, repeating some 40,000 years, after it was first heard. It is thought to emanate from a lost star-ship sent out from the Cygnus constellation, to find their origins. They were descendants of colonies established by the Ancestors, who never returned to assess their progress and well being. In all that time, the Ancestors have felt a deep moral guilt at this abandonment of their own kind. The long history of these events is illustrated by the Celestial Watcher, an omnipresent entity who plays the part of a narrator and can also manipulate human minds. It wants to seek justice for the lost crew, and make known the secret of a sacrifice made so long ago, that contributed to the human race on modern day Earth. The Ancestors triangulate the signal to the Milky Way galaxy and the planet Mars, where a first contact situation ensues; finding artefacts from the crashed ship and speculation is made, as to what actually happened. A two and a half year absence follows, during which the Ancestors journey to Oceanid – the planet from whence the fleet originally set out, with the joyous news that the ship had been found. Most of the planet's exploration ships' are recalled, but one is in a parallel universe, having adventures of their own in trying to find their way back. The Oceanids encounter a merciless race of empire building barbarians, destroying, and subjugating worlds, killing, looting, stealing technology, to expand their dominium in the name of their Emperor. An inevitable battle is coming, but how can pacifist races such as the combined forces of the Ancestors (Aquilaeons) and the Oceanids; fight the aggressor on their own terms?

Overall this series of two books cover an epic story, I was motivated to write a sequel because people like a continuation story and readers were making comparisons with Game of Thrones - which it certainly isn't like. This story goes beyond this universe and explores the worlds of a parallel universe with interesting aliens, a reptilian kingdom in underwater cities. It has echoes of all types of science fiction over the years, from Night of the Demon (a film in 1957) through Star Trek Voyager, a Martian colony long before the recent film of that name (The Martian) - I'd written the first book long before that, through Voyage to the Bottom of the Sea (the TV series from the 1970's) and possibly Guardians of the Galaxy which I've never seen, but I understand has a crew of misfits. These have been the influences that subconsciously influenced my writing through this book. As for the covers, I designed 3 versions but could not use these, and finally had to accept gallery images from Thinkstock which conveyed the imagery I was trying to get across. The front cover image represents the Celestial Watcher who is the narrator in both books, being able to see back in time and forwards to the future, even this entity comes to understand that there are three watchers whose boundaries of influence overlap. The design for the back cover represents the battle with the Apollumi and the worlds trying to put up some resistance to prevent subjugation into the Empire dominium.

The hardest part of writing this book was to achieve a 17,000 novel word length and keeping the time-line consistent across two books. Most books involve a journey, mine is no exception, I didn't want to involve a space-war, but it is inevitable to maintain excitement. I did much research in making space-technology plausible and checking out my own ideas. What did I learn from writing my book? Well, it is a commitment of at least two years. It is difficult to pick up the threads if putting it down for any length of time, if the plot is complex. I hope the readers enjoy reading both books together. The first book can bring you to tears in parts. The second resolves the fate of that lost star-ship and the moral guilt the Ancestors have felt in abandoning their colonies and refusing to share their technology, which is contrasted with the Oceanids willingness to share their superior technology.