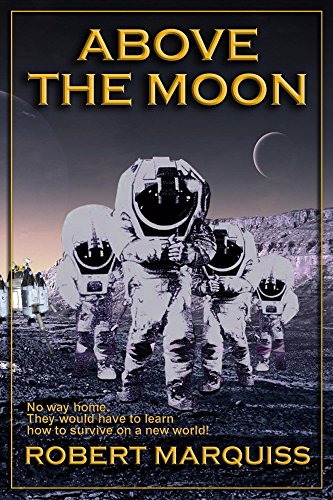 Book: Above The Moon by Robert Marquiss

about this book: After the Second World War, crashed UFO's began to be collected at Roswell, and were then moved to what became known as Area 51. Scientists worked furiously to try to reconstruct their technology with little success. That is, until one finally made a less damaging landing. This one was badly damaged and appeared to have been damaged in battle, but some systems were intact and functioning. And the occupant and his "pet" were still barely alive. The scientists began adapting those systems to American use.

In 1963 JFK ordered a moon launch. The USA was to be the first nation to land human beings on the moon and retrieve them. It was an incredible undertaking.

By then the Area 51 personnel had developed a space craft capable of getting man to mars and back. Three crackerjack pilots were chosen and trained for the mission: Colonel Blackstone as mission commander, Major Harding as pilot and Captain Wilson as navigator. At their mission briefing they met a surprise fourth member – their science officer was to be a robot named C4! It was totally understood by all crew members that there was a possibility that no return could happen. But the mission had to go forward at all costs. We had to know what waited for us out in space.

In 1969 JFK's moon launch went off like clockwork and captured the world's imagination. But something else happened the day of that moon launch. Another launch happened and was hidden in the radar echo of the moon launch. It's mission was Mars. The data from the second crash made it possible for the men to sleep for the majority of the trip to keep from going stir crazy. C4 would pilot the ship and wake them up when they arrived.

This space shot also went like clockwork and arrived successfully in orbit around Mars. C4 woke the men up and made sure they were OK. They prepared to take a lander down to the surface. Wilson stayed behind to maintain communication between the landing party and mission base.

The Colonel, Harding and C4 entered the landing module and separated from the main craft. As soon as the thrusters cut in to take them out of orbit, one of them exploded, wasting fuel, blowing out the control circuits and damaging one of their oxygen tanks. The ship was going to crash! Using dampers and parachutes, the crew managed to get down with only minor injuries, but the lander would never fly again. They were stuck with no way home, and the adventure was just beginning.