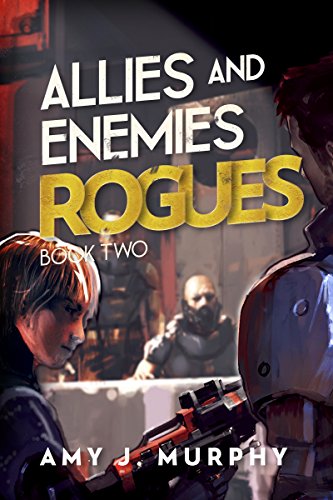 about this book: With a vivid cast of characters—from kick-ass heroines to gnarly space pirates— and set among alien worlds filled with undiscovered dangers, fans of Firefly and Farscape alike are sure to enjoy this fast-paced adventure with flavors of military science fiction and just a dash of romance. Allies and Enemies: Rogues is the highly-anticipated follow up title to Allies and Enemies: Fallen.

For renegade soldier Sela Tyron and her former captain, Jon Veradin, the Reaches were a chance at a fresh start and freedom from the Regime. But what should be easy is never easy. In this savage, hardscrabble region, ruled by the ruthless Guilds, the pair quickly find themselves in the crosshairs of scheming gangsters and their muscle-bound henchmen.

Meanwhile, Jon's sister Erelah Veradin was supposed to be dead. That was her plan, anyway, when she sought to destroy the relentless Tristic. Miraculously alive, she's now a captive of Zenti pirates led by the enigmatic Asher Korbyn—a man with his own secret agenda. Unsure of whom to trust, Erelah must face a new host of dangers on her quest to reunite with her brother as an even greater threat looms on the horizon and an old, familiar evil gathers strength in the darkness.