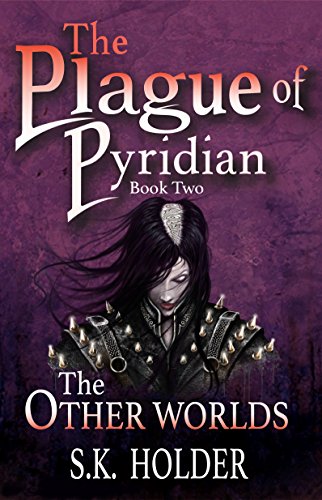 Book: The Plague of Pyridian (The Other Worlds Book 2) by S.K. Holder

about this book: This is the second book in The Other World Series. It is set on a new planet inhabited by aliens, called Pyridian. It is also set in London.

Skelos is not the main protagonist in this book, but he does feature as he is central to book three!

Connor is curious to find out how he ended up in Narrigh in the first place. He finds the answers he's looking for on Pyridian.

"In his mind, the game used magic to transport him to Narrigh. He had never thought outside the game and into the company who created it."

Connor thinks his brother, Luke, is hiding something from him, so he follows him. He is surprised when his brother goes to Tridan Entertainment, which is the company who created The Quest of Narrigh game. There he meets Ted Carthy, a games developer with his own scheming agenda.

Ted knows that strange things happen at Tridan Entertainment, that people disappear when they play the games. He just doesn't know how, but he has a few theories, theories that he's not keen to test out himself.

The character on the cover, Lin Aroda, featured in The Quest of Narrigh. She helped Luke find Connor.

Video: THE OTHER WORLDS...where the realms of science-fiction and fantasy collide.