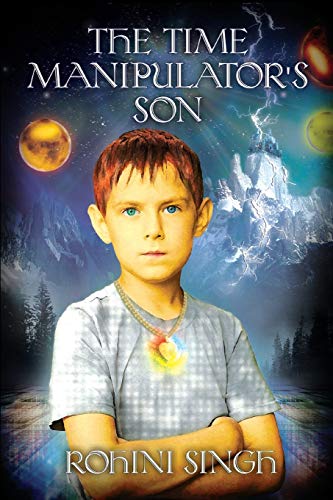 about this book: In a distant galaxy, the primitive planet of Chyspah is home to a diverse society of species and culture. The life of twelve year old Anomar Effilldar's shatters after his father has to forfeit his position as Supreme Leader of Chyspah. The Supreme Council accused him of deleting video files of Anomar's detention period from CHRIS, the planet's information system. He is further devastated when he finds out the Effildars are not his natural parents and he has subconsciously deleted the video files with his supernatural powers he inherited from his biological parents.

His mother Diante is from the Upper World. Together with Manthaar, her husband's cousin, she gives her son away to protect him after his father is murdered. His physical appearance is supernaturally altered to look like the biclopse species of his new parents. Manthaar and Diante are stripped of their powers and Diante is forbidden to associate with Anomar as punishment for giving the baby to mortals.

While adjusting to civilian life, Anomar learns that Daniel, an earthling, possesses similar powers to his people -- powers that Daniel acquired from being resurrected by a lightning jolt soon after his birth, altering his physiology. Daniel's best friend Benardo, an inni -- a biclopse with a medical deficiency, keeps the knowledge of Daniel's powers a secret.

Anomar's natural grandfather and King of the Upper World exposes Anomar and Daniel to an enchanting lifestyle filled with wonder and peril when they are given rules and guidelines to manage their powers. With the assistance of Daniel and Benardo, he discovers that Manthaar was responsible for his father's death. From this revelation, Diante is permitted a visit with her son. She reveals that her son is actually Daniel and not Anomar.

• A true modern fairy tale---reminds me of "The Wizard of Oz," but in space. With as much time travel as "Dr Who," and the cosmic intrigue of "Guardian of the Galaxy."
— Ray Friesen, cartoonist and children's author.

• A coming of age story that just happens to feature flying skateboards, a fortune-telling alien, and some very delicious snacks.
— Debra Pickett, journalist and novelist.