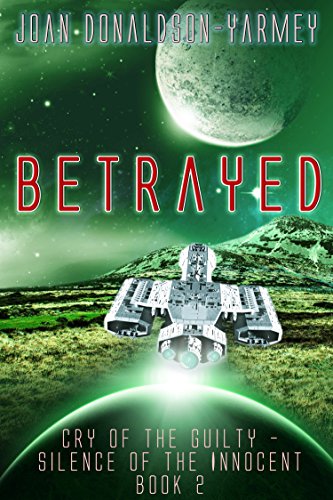 Book: Betrayed (Cry of the Guilty - Silence of the Innocent Book 2) by Joan Donaldson-Yarmey

about this book: In the first book, The Criminal Streak, of this series a new planet had been selected for a penal colony by the residents of a far off planet. The prisoners are deposited on the planet with supplies to build barracks and warehouses, a governor to oversee the progress, police to enforce some rules and food to last until they can plant gardens. But when the warm weather changes to cold the colony quickly disintegrates into chaos. The prisoners storm the warehouses for food and the governor and other officials leave the planet in the spaceship that had remained to be used for new supply trips.

Three prisoners, Gwin, Georg, and Jawn and the historian, Sari, discover the natural inhabitants of the planet living in a cave and are taken in by them. They learn their ways but eventually their resulting friendship leads to heartbreak for the cave people and could adversely affect the future generations of the planet.

I like to read and write mysteries but I strayed in sci/fi for this story and that's because I came up with the idea, wrote the two part series and then figured out what genre it belonged in. The series does incorporate mystery, romance, and lots of criminals.