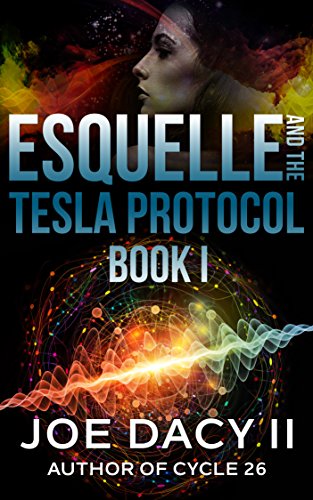 Book: Esquelle and the Tesla Protocol - Book I by Joe Dacy

about this book: The novel, the first of a trilogy, postulates a time when the United States must deal with the deleterious effects of the decisions it is making today, resulting in crushing debt, a pervasive surveillance apparatus and the loss of its position in the world. Backed into an economic corner of its own making, a shadowy group of leaders form the Pandora Working Group. Its job is to suppress any emerging technology that is deemed to be a threat to the "national security" of the country.

The main character is a strong-willed woman, who, through her own efforts, begins to discover the lengths to which this group will go to destroy her talented family. Although protected by some powerful allies, her actions drive the story. She is constantly underestimated by both her friends and her enemies as she fights to retain her freedom - and her life.

Underlying the technological action are some critical themes not generally found in "standard" science-fiction.

One of those themes is Chaos Theory, the idea that the initial conditions of an event can portend unpredictable, far-flung and often catastrophic results. The characters' actions and decisions create a tightly-woven matrix of cause and effect.

Another is the idea that the past always presages the future. The chapter lead-ins often bear this out. (As an example: I was surprised to learn that the common axiom "Hell hath no fury like a woman scorned" dates back to 1697!) Those lead-ins often form a sort of "picture frame" for the chapters they introduce.

Another goal of the work was realism. Every location, almost every business, every motto and every technological description is real (at least in 2014). And every piece of "advanced" technology is also real, or at least has its roots in actual technology today. The work includes a large number of maps and other graphics.

Along the way, we also find a bit of romance, some irony, some humor and a good deal of insight into how technology affects the human experience.

Video: Esquelle and the Tesla Protocol