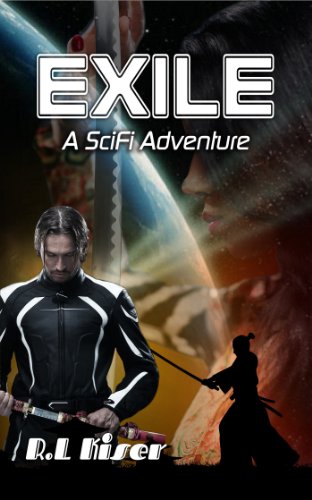 about this book: In Earth's far distant past an epic battle took place in space thousands of light years away. Facing only annihilation Captain Kendrick turned his interstellar fighter craft to the farthest reaches of the galaxy until he reached a blue marble of a planet and landed on a large island in its northern hemisphere. Earth. 1600s feudal Japan. A 6'5" warrior from an advanced culture in a land populated by 5'8" war-like people.

He befriends the local Shukido, a Bushido Warrior-Protector, brings innovation to the local ship builder Honashi, master of the village, falls for his beautiful independent daughter Doiyoko, saves and is adopted by a tiger. He helps them to thwart an attack by a neighboring warlord. They in turn help him to defend against his enemies when a patrolling spacecraft discovers his presence, sometimes by using kinetic energy weapons (they throw rocks).

When challenged by Honashi to a race using his sleek new sailing sloop vs Honashi's own through the dangerous Doro-bai, the treacherous shoreline passage wrecks the ship. He and Doiyoko are forced to overcome their injuries, climb a steep cliff, and strike out overland where they encounter and battle bandits. In the process they save an endearing young woman who charms the elder Honashi when he finally finds and rescues them. But she's not what she seems.

• Great fun! This book is just a lot of fun! With flavors of Samurai and Steam-punk adding spice, it rocks along from delight to surprise, and all along it is highly satisfying. — William Fletcher

• Exciting - this is the most appropriate word to describe Exile. Author R.L. Kiser put a bit of everything in the story. — Lit Amri for Readers' Favorite