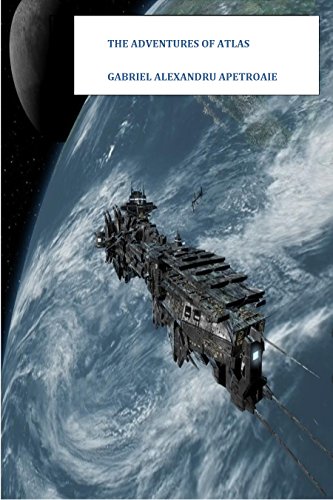 Book: THE ADVENTURES OF ATLAS by Gabriel Alexandru Apetroaie

about this book: Six hundred years in the future, humanity is faced with extinction from a mega-volcano which has awakened after many centuries. The only escape is represented by Atlas, an Earth-sized ship built by the four hundred billion citizens of Earth. It will serve as an ark for humanity in its search for a new home and it will also be its protector against the dangers of space. In order to find a new planet which may serve as humanity's next home, the world leaders create the so-called "planet explorers," an army elite corps designated to go to the planets and collect data about its resources, oxygen level, flora, fauna, etc. and to see if the potential locals are hostiles. From here to awesome adventures which will include a city in mid-space, a planet the size of a tennis ball, an all-knowing hologram and alien species which will range from far more advanced to primitive and from friendly to hostile, the distance is extremely small.