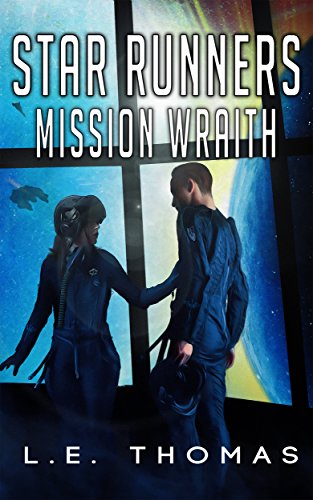 about this book: From an early age, my dream was to write an adventure trilogy inside a unique universe. Star Runners: Mission Wraith is the realization of my dream. The story of Austin Stone has been one I have thoroughly enjoyed taking, and I hope to continue his adventures in the future. When I first started this journey, I desired to make each book different from the others. The first book was a discovery novel and the second (Revelation Protocol) was a relentless chase. For this third volume, I wanted to do something different than the first two. I wanted Austin to finally get his leave. I thought he deserved a break.

Most importantly, I wanted Star Runners: Mission Wraith to leave Earth behind and start seeing what life in the Legion Navy would be like for Austin and the other Star Runners in the Thirty-Second Tizona. What would it be like to square off against the Zahl Empire during the Galactic Cold War? What would life be like on a Legion carrier in deep space?

I wanted the third book to be a spy adventure reminiscent of the Cold War thrillers I grew up reading. I wanted Austin to be ripped of all his support system and thrust into a world of espionage with high stakes. I knew I wanted Austin to face off against the toughest challenge the Legion had faced. The Zahl Empire has been testing the most powerful space fighter in the known galaxy. The Legion Trident cannot compete with it. If completed, this fighter will shift the uneasy balance along the Zahl-Legion border and send the galaxy into a second Galactic War.

I am very proud of the finished product. I truly hope you enjoy it. The story of Austin Stone's transition from teenager on Earth to a seasoned Star Runners is complete. I can't wait to continue his adventures in the future.