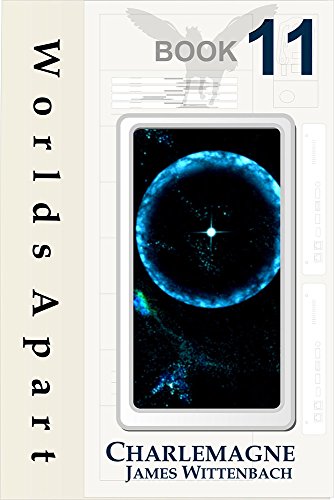 about this book: Worlds Apart Book 11 is the penultimate book in the Worlds Apart epic that has been written over most of the last twenty years. In some ways, the series is very simple and old school; a spaceship and a crew on a daring interstellar adventure. In other ways, a fresh and different take sometimes compared with 'The Hitch-Hiker's Guide to the Galaxy.'

The premise: Over a thousand years after the collapse of the great Human Galactic Commonwealth, each of the ten thousand (or so) colonies of humankind has developed its own unique culture, some so different they are more alien than human. The Pathfinder Ship 'Pegasus' has set out to rediscover and reconnect these disparate colonies after centuries of separation.

In Book 11, Pegasus arrives at the Charlemagne Starlock, an artificial construct a thousand miles in diameter capable of slingshotting starships across the galaxy. The ship receives grim news; its mission is over. 'Pegasus' is to be sent home, its crew scattered across the galaxy. The officers must make a decision; accept their fate, or mutiny against.

What will be the final destiny of Pegasus? Scrapyard? Museum? Orbital brothel? Or, will the ship live to fight another day against something greater and more terrible than any of them can imagine.