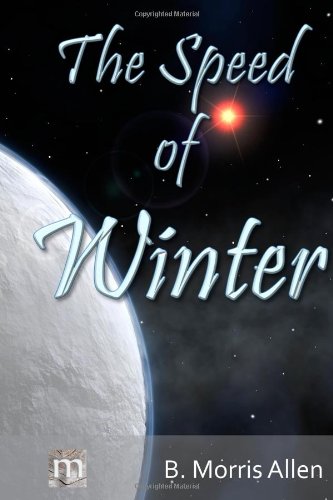 Book: The Speed of Winter - Four Seasons Quintet #1 by B. Morris Allen

about this book: Earth is dying. In a desperate effort to ensure the survival of the human race, it sends out several 'arkships' - suspended animation colony ships. As one such ships nears the end of its journey, two of the crew decide to bear a child. When the ship arrives, they find that the target planet is a frozen, uninhabitable, ball of ice. The Speed of Winter tells the story of the ship's journey and arrival through the eyes of Elise, the only child.

The Speed of Winter is the first of the Four Seasons quintet exploring the voyages of four arkships and the fate of those left on Earth.

• Inspiration
The book was inspired by two things: the idea of what would happen to an arkship that didn't make it - whose target was unliveable, and by a phrase from the UNDP Human Development Report, which included the phrase "the speed of winter".

• Readers
The primary readers are adult science fiction fans who are looking for good, moving writing.

• Cover
The cover is based an an image from the European Space Observatory. It's an artist's rendering of a frozen planet. I enhanced it to make it more icy-looking, but it's otherwise untouched.

• Hardest part
There's a brutal and disturbing scene in the book that was extremely difficult to write, even though it's not graphic. It took me about a month to get past it.

• Readers
This book is grim, but I hope still fulfilling to read. The others in the series are happier!