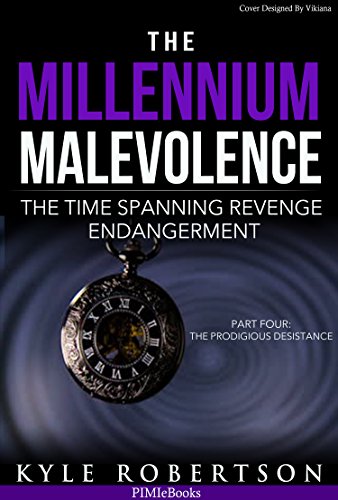 about this book: This is the final eBook of the series.

Conclusion of the four eBook series

(Get the entire series under The Millennium Malevolence)

In the 24th century, Adama Aruna was a history mentor who had been through a life changing suspenseful adventure. It began for her when she went out with her fellow lady mentors, Nanjiri and Alexis to Scallywags so the other two could meet men. Adama was unfortunately the only one to meet a guy, except that immortal danger guy wanted her obliterated for reasons she didn't know.

She was saved from certain death by a fellow mentor Gunter Svenechoven whose real name was Revyn VanEl. They escaped from the eternal demon, and the three women had to learn the pagan practice of Wiccan spells renamed Larrasomec in a secure location because Adama had to use it to fight the immortal with her annihilation in mind because she was an ancient Protector's last descendant who destroyed his love during the Renaissance, and he vowed to wipe his entire bloodline from the face of the Earth.

Adama was thrust into learning this new magick of the 24th century to defeat the vengeful immortal. Being the last descendant, she had a natural ability to understand, and excel at the practice.

She went through training, romance, Blood Moon possessed lycans, and knowing of resurrection. One vital resurrection exposed her whereabouts to the immortal, and he was still relentlessly coming for her.

In this conclusion, Adama has to find a way to defeat the juggernaut. He was coming, and nothing she could do would stop her heinous death, or was there?

Science fiction with a female protagonist. She realizes how special she is when she goes against a relentless malevolent entity who cannot be killed.

Get it now to complete the series