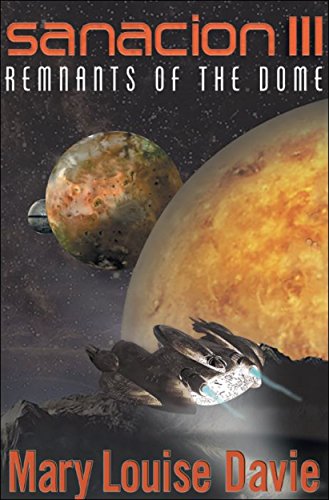 about this book: As the third book starts in the series our favorite characters (mine is Melanie, so smart!) rejoin us and Lenora has some news. Steve has his hands full with both Lenora, his daughter, and the numerous problems on the ship Sanacion.

Having decided that he (and many others) were not happy on their new planet Sana (short for Sanacion) a few tens of thousand of civilians as well as Colonel Steve Jennsen and his crew decided to continue their exploration.

From the problems realized on the ship to problems at an asteroid with an unknown entity to encountering wild and scary creatures when fueling up on a moon of a planet, to encountering intriguing groups of people and creatures alike on the planet the Moon orbits. The action, the science, the love story, the human story, all is here in the third Sanacion which ends in a way you never see coming!

Each book in the Sanacion series is both a stand alone and a part of the series. While you do not have to read the first to get the second and third, it helps. Think of the story of your life, a decade in each book. If the reader jumps in on the 40's they are bound to have missed some wild days in your 20's!

I hope you enjoy the series as much as I have loved writing (spoiler alert - and continue to..) Sanacion will be on hold a bit while Caz grows up (read and find out who he is!) but coming out in a few months is "Target Earth: You Only See What You Want"

Video 1: Sanacion: The Black Hole Mission
Video 2: Sanacion II: We are the Aliens