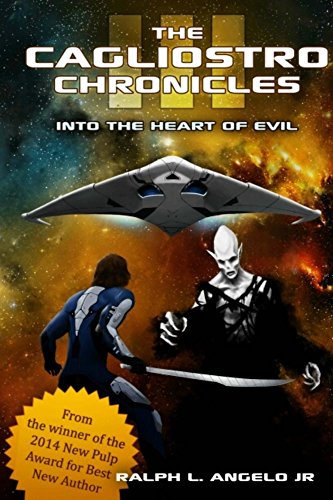 Book: The Cagliostro Chronicles III - Into the Heart of Evil by Ralph L. Angelo Jr.

about this book: The war with the alien Agalum empire rages on as the Cagliostro and its crew are handpicked by the President to infiltrate Agalum space and retrieve a long rumored cache' of ancient weapons designs before the Agalum can find them. But there's a new problem to add to the already dangerous situation; the mysterious and monstrous interdimensional race called the Tahir Ga'Warum! Deadly and horrific, the Tahir Ga'Warum have entered the war between worlds on their own side and no one else's. Their objective? Complete domination of this dimension, and they may indeed be powerful enough to do it.

Join Mark Johnson, Dan Sledge, Ariel O'Connor, Red Robinski, Eddie DiGenovese and the crew of the Cagliostro on their most desperate mission yet as they try to preserve Earth's existence. But against both the Agalum and the Tahir Ga'Warum will they be too little too late? Find out within the pages of The Cagliostro Chronicles III-Into the Heart of Evil! By Ralph L. Angelo Jr.