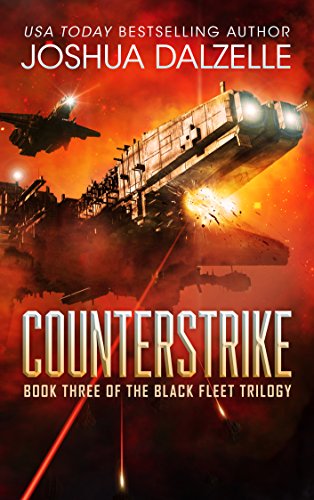 about this book: An implacable enemy, a resolute starship captain... Will Jackson Wolfe be successful in taking the fight to the Phage? Or will it cost him everything to try?

A new, mysterious ally and a brazen plan for a counterattack could either mean a quick end to the Phage War or the beginning of the end for the human species. Jackson still doesn't know who to trust or if the plan he's been presented is even feasible, but he knows he can't sit idle as the Phage continue to carve a bloody swath through Terran space.

Counterstrike is the conclusion of the Black Fleet Trilogy, a story I began wiring in 1998. It it's original form, the story was one enormous volume that lacked focus in places and never felt like it fully came together. Now, in this final iteration, I am wholly satisfied with not only the story's conclusion but with the evolution of my main character, Jackson Wolfe. This story was always about him and his struggles told against the backdrop of a war with an enemy nobody ever fully understood. I hope the readers enjoyed this story as much as I enjoyed writing it. I feel like there were a lot of potentials stories in this universe left on the table so it's likely there will be more Black Fleet books in the future that focus on these other characters and their tales.