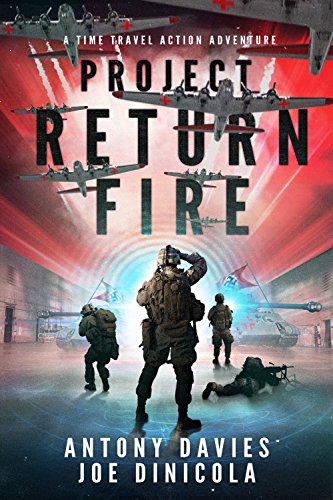 about this book: Written co-written by Antony Davies in the UK and Joe Dinicola in the United States, Project Return Fire sees a team of US Army Rangers transported from 2015 back to 1945, where they must battle an elite Nazi unit before they can turn the tide of the war in Germany's favor.

Although this has a strong science fiction foundation, as most time travel stories do, it will also appeal to action-adventure fans, as the Army Rangers go through foot chases, firefights, aerial bombings, hand-to-hand combat, and knife-fights.

This actually started life as a movie script, written by Joe, and posted on an internet forum, where he met Antony, who loved the concept but suggested he could rewrite the content while keeping the core story the same. Both agreed this should be a "popcorn blockbuster" rather than a deep introspective, so that was the aim: entertain the audience.

The pair hit it off and, from Antony's rewrite, went through many versions, taking notes from a production executive at a movie studio, before ultimately being told "no." Whilst continuing to promote it, since Antony had a background in writing novels, they decided to rewrite it from scratch in prose format.

During the process, they have improved the story itself, given more depth to characters through multiple points of view, and stepped up the technical aspects of time travel, delivering a popcorn blockbuster of a novel, which reads at a fast pace, while asking questions of destiny and free will.

Combining bloody action, breakneck thrills, and intriguing science, Project Return Fire is perfect for those looking for an entertaining read, with a little extra bite.