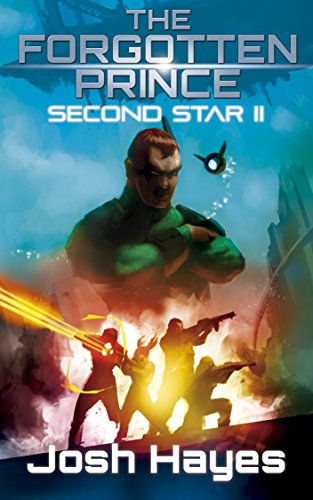 about this book: The Forgotten Prince is the 2nd book in the Second Star series, a science fiction re-imagining of Peter Pan and the world of Neverland. If you've ever seen SyFy's "Tin-Man" that would give you an idea of what this story is like.

This adventure follows fighter pilot John McNeal, who after being pulled through a rift in spacetime in the 1st book (Breaking Through), finds himself smack-dab right in the middle of an alien world known as Nevaris. As John comes to grips with the world around him, he makes a few friends, as well as some new enemies, all while being pursued by the ruthless Lord Commander Pan, bent on his complete obliteration.

If you like clever twists on old stories and have ever wondered what Neverland might have been like had it not just been a bedtime story, this series is for you.

The Forgotten Prince took about three months to write, and several more to revise and get just right. I've had a blasted finishing up this story and I'm eager to continue the series in the next book, Shadows of Neverland, which I hope to have out by the New Year.

Here are a few quotes from people who read Breaking Through and were kind enough to leave a review:

• "I love the writer's ability to immerse your mind into this fantasy world that slowly unfolds in front of you." — GoJimi, 2014

• "…I was delighted and surprised…I can't wait to read the next installment." — Crossbow, 2014